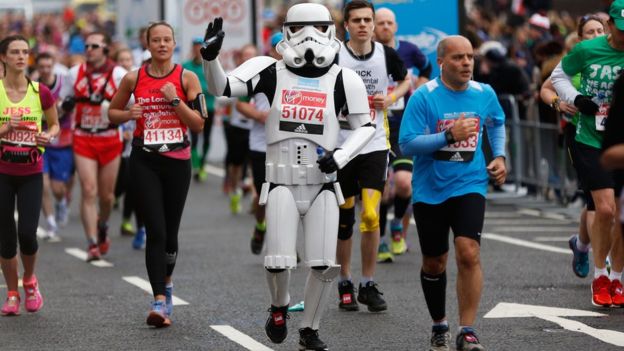 Being a Star Wars fan and looking to get more attention to help his fund-raising efforts, he first wore the outfit for the marathon three years ago.

He has raised more than £20,000 for Make-A-Wish and Spread a Smile, but now he feels it’s time to hang up his helmet.

« I don’t want my family and friends to get bored of me as the running stormtrooper, » he said, adding that it felt right to round it off as a « trilogy » in Star Wars’ fashion.

Seeing Sunday as his « lap of honour », he’s not even going to try to break the Guinness record he set last year – the fastest Star Wars character at 4:59:12 – due in part to the heat.

« I’m going to stop and talk to as many people as I want along the way, » he said.

After all, he says, it is the crowd’s smiles that make the day for him, especially when he sees children’s reactions to his costume and knowing « you’ve made their day ».