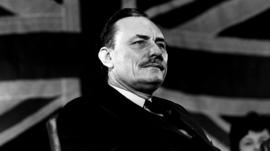 In February 1968, eight-year-old best friends Mike Edwards and Raymond Comrie found themselves thrust into the spotlight when their class at West Park School in Wolverhampton was interrupted by a visitor.

« I can remember the door was open, someone has come in with a camera, » recalls Mr Comrie. The camera « ended up pointed at me and Michael ».

To the boys it wasn’t a big deal – they didn’t even know why the photographer was there, or who had invited him into the school.

The media attention had been prompted by something Wolverhampton South West MP Enoch Powell had said earlier that month.

Two months before his notorious speech of April 1968, he had spoken of a constituent he said had told him how her « little daughter was now the only white child in her class at school » – and the press wanted to find her.

The school was never identified by Powell.

Indeed, there were doubts about whether it existed at all, but it was suspected the MP might have been referring to West Park.