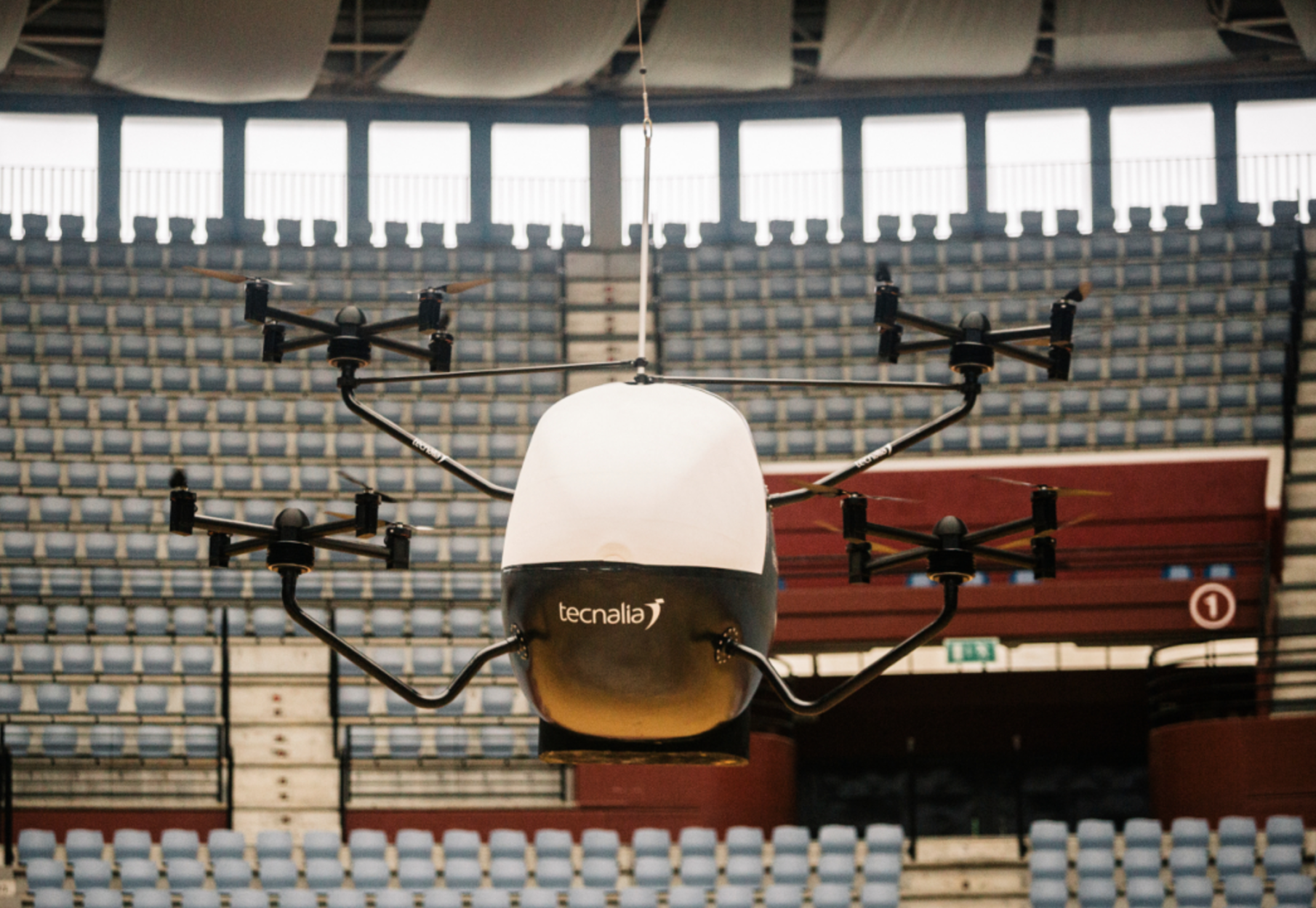 The technology centre has presented a prototype in Donostia-San Sebastián today, which is one of the first three in Europe and the first in Spain that is expected to be on the market within 5 years

San Sebastian, 15 July 2019. The urban mobility of the future has its eyes set on the skies. Vehicles are expected to be seen flying across cities around the world as an alternative to land transport within the next decade. In fact, the “air taxi” business is expected to reach some 32 billion euros by 2035 according to a study by Porsche Consulting.

There are currently 6 prototypes worldwide and the research and technological development centre TECNALIA has presented the first Spanish prototype in Donostia-San Sebastián, which is designed to cover short distances in cities without a pilot. It is a prototype designed to transport a person or loads of up to 150 kilogrammes and to cover urban distances of up to 15 kilometres in 15 minutes, meaning it will be able to cover the transport requirements of urban centres in 85% of the world’s cities. The vehicle will travel at 90 km/h during journeys, although its architecture could allow speeds of up to 190 km/h, with a cruising height of between 100 and 300 metres, pending the evolution of current legislation.

Agustín J. Sáenz, the Deputy Director or TECNALIA’s Market division has ensured that “it is a milestone in the Urban Air Mobility field, which positions us as pioneers in Europe together with Germany and has turned us into a world leader”. He also affirmed that “this is a new aircraft concept that could be scaled from one to four passengers depending on the integration demanded in each city and for each service”.

TECNALIA’s air taxi has an aerodynamic cabin measuring 1.8 metres by 2 metres with a door and window. It has four drones assembled on the top and underneath the aircraft which are used to displace the cabin. And this is where the main innovation lies: thanks to an advanced control system, these drones move independently but in a coordinated way, which favours the stability, efficiency, precision and controllability of the cabin and therefore the feeling of comfort on the inside.

Joseba Lasa, one of the people responsible for the development, explained that “the main novelty of TECNALIA’s aircraft lies in the fact that the architecture allows the cabin to maintain its orientation regardless of speed, a clear advantage over conventional drones and current “air taxi” applications. This feature enhances the flying experience, providing a sensation similar to that of travelling by car or bus from a dynamic point of view”.

The end product will be autonomous, incorporating positioning and communications technologies used in other pilot-less vehicles. It will also have precise landing and take-off capabilities for reduced spaces such as a parking space, it will be able to withstand adverse environmental conditions such as strong wind and rain, and unpleasant air flow created at take-off and landing will be minimised.

In terms of interacting with the aircraft, the design has been conceived to maximise its integration into the day-to-day life of the user and the city. There will be mobile phone interaction, the aircraft will be identifiable at street level, and it will be accessed from the rear end in a comfortable and simple way, with sufficient space to move around.

Agustín J. Sáenz explains that “one possible operational model for this type of vehicle is that of a shared service, which would provide access to the aircraft when a user wishes to travel autonomously from one end of the city to another. They can also be used as urban goods transport vehicles or for fast access in case of an emergency”. This wide range of uses is possible thanks to the various developments that this prototype has entailed, and which can be reused in whole or in part for other applications in the drone-based mobility field.

TECNALIA is currently negotiating with various industrial partners to develop and industrialise the end product, and it expects this type of aircraft to become a market reality in the skies of various cities within five years. At the same time it is also working with various authorities involved in making the legislative changes required to make this possible. However, countries such as Germany and France are already positioning themselves with pilot projects, and the first experimental flights will be carried out in Los Angeles, Dallas, Dubai, Singapore and Tokyo in 2020.

TECNALIA is a leading Research and Technological Development Centre in Europe, with 1,400 experts representing 30 different nationalities, focusing on transforming technology into GDP to improve people’s quality of life, by creating business opportunities for companies.

In fact, in 2018 it has increased collaborations with companies by 12% and has worked with over 7,000 companies since its inception eight years ago, 75% of which are SMEs. The Centre has also recorded a turnover of 110.3 million euros, an increase of 6% compared to 2017 and the highest income level in the past 7 years.

Is French healthcare the best in the world?