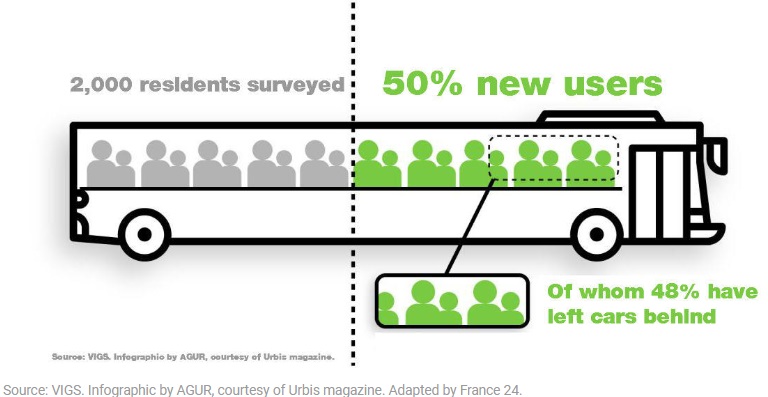 The city of Dunkirk in northern France launched a revamped bus system last year with a twist – it’s completely free. A new study shows that the programme is not only revitalising the city center but also helping the environment.

Dunkirk, which sits on the coast of Normandy at the northernmost tip of France, is best known for the battle and evacuation of hundreds of thousands of Allied soldiers to Britain during the Second World War. After the war, the port city was rebuilt as an industrial hub, with oil refineries and a major steel mill.

Now the city (population 88,000) seeks to become a beacon of a greener economy, by building infrastructure such as a large-scale wind farm off the coast and transforming its city center to be more pedestrian-friendly. Key to this effort is its free bus system, inaugurated on 1 September, 2018. The network connects Dunkirk to a cluster of neighbouring towns, with five express lines running every ten minutes throughout the day, and a dozen other lines serving less dense areas.

For many residents, the effect has been nothing short of liberating, says Vanessa Delevoye, editor of Urbis, a magazine of urban politics published by the local government. To get around town, you no longer need to look at the schedules, buy tickets or worry about parking, she says. You just hop on the bus.

“It’s become a synonym of freedom,” she says, attracting those who might not otherwise have used public transport. In this largely working-class city, “people of limited means say they’ve rediscovered transport” – a prerequisite to finding a job, maintaining friendships or participating in local arts and culture. But it’s not only disadvantaged or working-class people who take the bus. It is also attracting white-collar workers, students and pensioners, according to Delevoye.

Accessibility has been “one of the keys of Dunkirk’s success” with free transport, says Maxime Huré, a political scientist at the University of Perpignan and president of the think tank VIGS, which specialises in urban development and transport issues. Over the past year, Huré has led an in-depth study of Dunkirk’s free bus experiment, commissioned by the city and carried out by an independent team of social science researchers. The study will officially be released on 11 September, but some of its initial findings have already been published. They show that ridership has spiked over the last year, more than doubling on weekends and increasing by around 60 percent during the week.

More revealing than the simple increase is the way that the free buses are changing residents’ habits. In a town where a large majority of residents (about two-thirds) have typically depended on their cars to get around, half of the 2,000 passengers surveyed by researchers said they take the bus more or much more than before. Of those new users, 48 percent say they regularly use it instead of their cars. Some (approximately 5 percent of the total respondents) even said that they sold their car or decided against buying a second one because of the free buses.

World of the Weird