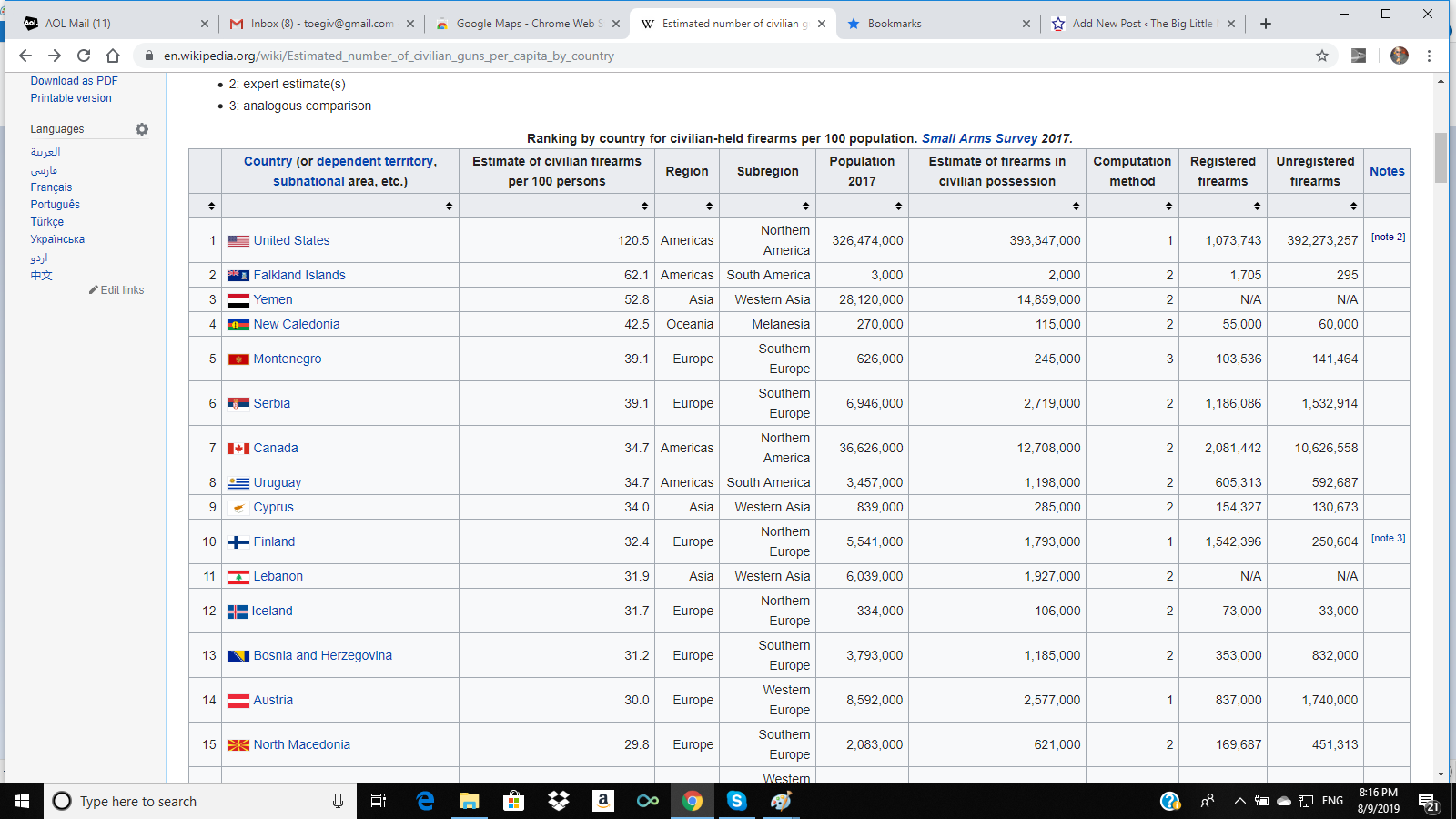 I am old enough to remember hearing about a quaint hunting rifle association that wanted to protect the rights of hunters much like conservationists want to protect Mother Nature. There wasn’t a political bend to their mantra, they were hunters who like hunting. Sorta like The Sierra Club members who drive Volvos and have a gun rack in the back. You find them on rural highways and byways going to or from opening xyzxyz hunting season.

Now they keep a friggin’ score card on each member of Congress. It’s like they’re all back in school and Papa Wayne has to grade their performance on each bill that might affect ……………………………… duck hunters? Nope. No longer content with ensuring that you have legally bagged your quota of Eider for the year, they are now concerned that every criminal in the US has the right to purchase a gun that can accurately disperse 100 bullets a minute or more. I guess the ducks in the US are particularly jerky.

America sure is a nation of surprises. It likes to pretend that it is first in everything,  even if it isn’t even competing. Well, it has found a new area where it dominates like no other country. There are more guns in the US per person than any other nation. We’re number one. There are more guns than people. Not even countries at war can boast of such prowess. Second place, the Falkland Islands, has half the ra te of the United States. But where we excel is in the usage of these weapons. Not only do we have more, but  we use more. We have more mass shootings than days of the year. And you know something, we kinda expect that. You can’t have this many guns and just keep them in your closet for a rainy day, right? Guns might not kill people, but put a human finger on the trigger and you’ll see exactly why Smith and Wesson saw their cash cow while staring down the barrel of one of their guns.

We have more guns and we shoot up more people than any other country on the planet (unless they’re at war). And we have the balls to complain about human rights abuses in other countries, like killing someone you’ve never even seen before is better than putting someone behind bars for a few years.

Fortunately, we now have a president who doesn’t care about lip service. He doesn’t want to pretend the US is all nicey with its detainees, whether at Guantanamo or Rykers Island. He doesn’t care. They won’t vote for him anyway. He goes for the jugular. Get out the heavy weapons, this is for keeps.

He will treat minorities like the low-life rejects of society that he always has done. His father before him marked the questionnaires with a “C” for colored, just so the stupid clerks wouldn’t screw things up. Latinos, new immigrants from southern Asia, western Asia, or Africa need not apply. You don’t want one of “those” renting next to you now, do you? Trump has learned well and he knows who the rejects are in society and how to make them disappear.

His cult of personality followers will do whatever he says. If they ever felt emboldened to use their weapons when there was a Black man in the White House, they now feel omnipotent with a stone-cold White Supremacist living there. We have had a gun-infested society for a long time, but their aims were diverse and without focus. Trump has given these people their focus. They now know who they will kill and why. They  have received their marching orders and they are more than ready to carry out their instructions.

There have been three copycat attempts since El Paso – in less than a week. We don’t have enough law enforcement to stop all those who feel they have received their marching orders from Trump before they move into action. We can only await the results of their actions. Oh, and I’m sure thoughts and prayers will make everyone happy after the carnage is counted and the stats officially certified.

I am old enough to remember hearing about a quaint hunting rifle association that wanted to protect the rights of hunters much like conservationists want to protect Mother Nature. I am old enough to remember when American presidents cared about the people who fell victim to unforeseen circumstances, like a mass shooting, and held and consoled the aggrieving families and maybe even shed a tear or two along with them. Using mass shootings as a backdrop for one’s next campaign fundraiser is lower than immoral. But this is the America of today. We voted this man into office because he represents who we really are. We are people who “high-five” each other at the death and suffering of others, giant smiles on our faces slapping our backs because our rally turnout was larger than someone else’s.

Welcome to the new America.