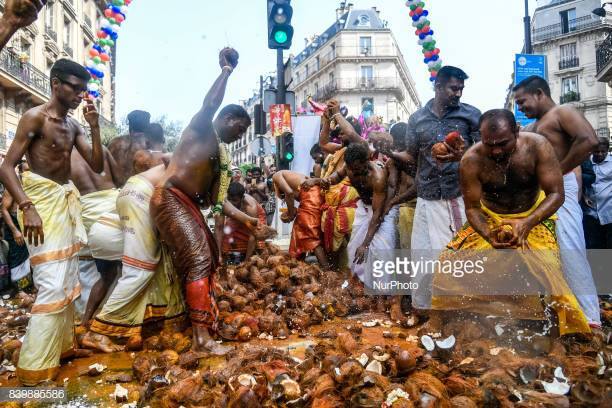 It has been an interesting day…so far.

The neighbor’s kid came running home at around 9.30 AM this morning and told me that his grandmother wanted to see me. Being the friendly neighborhood agnostic, I tagged along and went to see his granny. She was a tiny but sprightly octogenarian-soon-to-be-nonagenarian, and she took me by the hand and made me sit down next to her. She said she wanted me to help her out. I said that if I could do it, I most certainly would. She then tells me that she had a dream about Shirdi Sai Baba last night, and that the saint told her to go to the Varaha Perumal temple. I could only respond with a tame “You’re so lucky! I never get these dreams!” She then asked me whether I would take her there adding that I was like her son too. I asked her, “Why me?” She then told me that she asked her own son to take her to the temple, but he flatly refused saying that she was crazy, that he himself was going to some other temple, and he couldn’t take her to a temple which was on the outskirts of the city. I told the lady that our car was not available because da missus had an emergency call from the hospital and had already left the house.

She then asked her grandson to call another neighbor, a Muslim, to their house, and when he came, she narrated everything all over again and asked him whether he would lend us his car. To my great surprise, the Muslim guy said that not only would he lend his car, but he would also accompany us on the journey, provided we visited the Shirdi Sai Temple which was a slight distance away from the Varaha Perumal temple, explaining that Shirdi Sai Baba was a Muslim Peer and that he had great powers; however, he wouldn’t enter the Varaha Perumal temple. The only hitch was that he wouldn’t drive because traffic on the highway was intimidating. They both then looked at me, and I realized that I had been checkmated into becoming the charioteer.

When I was a schoolboy, my dad often used to say “Put yourself in the other person’s shoes and try looking at a problem from his point of view.” Easier said than done, of course, but today I tried out the same formula. What if I was a religious 88-year-old woman who wanted to visit a temple and what if my own son was not interested? I then said okay, but could I just inform da missus that the dog was loose and I wouldn’t be home when she returned? They agreed and I rang up my wife. The response was predictable. “No wisecracks inside the temple! Behave yourself! I don’t know why that old woman wants you to pollute that temple! Feed the cat and the dog before you leave!” I said, “Sure! You can rely on me,” and we set out.

As we got on to the highway to Mahabalipuram, the Muslim said that we should see Shirdi Sai Baba first since he was the one who came in the old lady’s dream; on our way back to Chennai we could visit the Varaha Perumal temple. Accordingly, we reached the Shirdi Sai Baba temple and when we entered the premises, we could see quite a few Muslims there too. It was quite easy to identify them, because they all wore handkerchiefs on their heads; evidently, they earnestly believed that the saint hated the sight of hair on the scalps of the faithful. The temple was spotlessly clean and incredibly well maintained with a huge garden and numerous trees. It was a stone’s throw away from the beach. There was a huge idol of the saint and a qualified Muslim.

specialist was seated next to the idol, reading out verses from the Quran. Apparently, Hindus and Muslims alternated in singing the saint’s praises. The audio was not very loud and one had to strain one’s ears to listen to what was being intoned into the microphone. Otherwise, there was complete silence, and one could hear the wind rustling the leaves in the trees. People were seated cross legged with their eyes shut. The old lady dug her elbow into my ribs and pointed out to the rest of the people. “Sit down and meditate,” she said, and I, being a very spiritual person, closed my eyes and started meditating on the Holy Trinity of Glenfiddich, Old Monk, and Bacardi. Five minutes later, she dug me in the ribs again and the three of us quietly started to leave. On the way out, the Muslim friend pointed out to a stone engraving fixed into the wall, which had the eleven sayings of the saint. He took good care to triumphantly point out the second saying which read as “The wretched and miserable will rise to joy and happiness as soon as they climb the steps of my mosque.”

We left this temple and on our way back to the city, reached the Varaha Perumal temple. For the non-cognoscenti, Varaha is one of the avatars of the Hindu god, Vishnu, who took the form of a giant boar (God made Pig in His Own Image?). This temple was the complete antithesis of the previous one. It was possibly even noisier than a fish market. The Muslim said he would wait in the car, and the old lady and I sallied forth. She wanted to perform an archana (invoking the deity to intercede?) for her granddaughter who was of marriageable age. She told me that the deity was also known as Nithya Kalyana Perumal and that he had the capacity to accelerate inexplicable matrimonial delays. Sure enough, there were plenty of young boys and girls, some newly married, who had come for a thanksgiving, and some who had come hoping that the god would speed up the process which they obviously found inordinately delayed themselves. There was a gentleman playing the nadaswaram loudly in one corner, and children were running around shrieking at the top of their voices and laughing. It wasn’t like any temple I have ever seen so far. A happy picnic atmosphere prevailed.

There was this board in Tamil which can best be translated as “For heaven’s sake, don’t eat here!” People took no notice of it. Probably, they construed it as some kind of affront to their democratic nature or possibly they thought it was some kind of secret code, because when people saw the board, their eyes lit up; they whipped out their snacks which were invariably lemon rice and curd rice, sat right underneath the board, concentrated on the food and ate with a religious fervor, jaws moving rhythmically. I looked at those moving jaws and was reminded of the cricketer from Antigua, Vivian Richards, chewing gum before dispatching another ball out of the stadium. Eats over, they threw the banana leaves down, and the goats which were all over the place, polished off the leaves. The old lady saw me looking at the gourmet devotees and said “Look at them! Can you imagine such a thing happening in Kerala? There is so much we have to learn from the Malayalis!” And I nodded my head silently like Manmohan allegedly does when Sonia tells him what his chores for the day are.

The queue inched forward and we reached the coconut-breaking specialist. This dude would collect the archana tickets from the faithful, whack the coconut nonchalantly on an iron rod with a stylish follow-through, and hand over the neatly cut two pieces to the faithful. It was abundantly clear that he was an expert; he had to whack the coconut only once. Years of experience, I guess. Anyway, we reached the sanctum sanctorum, and I had my first look at Varaha Perumal with Bhooma Devi (the earth goddess) seated on his lap. The old lady handed over the archana paraphernalia to another specialist (this dude was apparently a linguist) who was near the main idol, and he yelled out something loudly in Sanskrit to the deity who evidently wanted to hear nothing either in Arabic or Latin. These gods are all linguistic chauvinists. Say something in Sanskrit to Allah and face his wrath. Say something in Chinese to Jesus in the Vatican and see what happens.

We left the temple after about an hour or so, and the old lady was ecstatic. As we got into the car, she reached over from the back seat and ruffled the sparse hair on my head saying “God Bless You, my son!” We dropped her at her house and there was a spring in her step as walked in through the gate. She rang the doorbell with a flourish. There was quite a bit of follow-through in the way she rang the bell; she reminded me of Roger Federer. Picked up a few tricks by keenly watching the coconut-breaking specialist, I thought to myself. I leave the Muslim’s car in his house, and we take leave of each other after a cordial “Khuda Hafiz” to each other.

Half an hour later, the old lady’s son was at my door. “What did you do to my mother?” he asked. “What do you mean?” I asked him, telling myself that I just hoped she hadn’t kicked the bucket. “I have never seen her so happy in years!” he said. And I told him that I just gave her what she wanted without changing or compromising my own identity in any way.