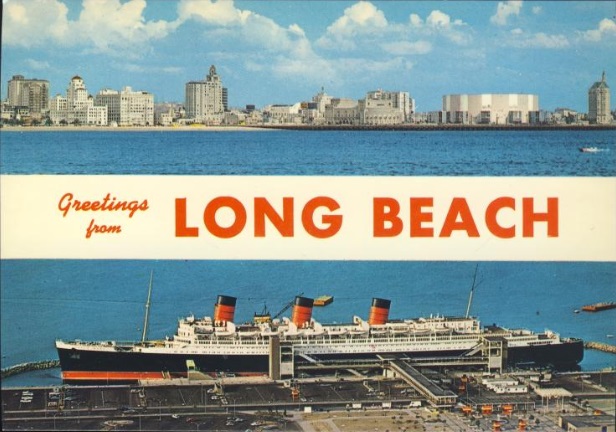 Another sunny day in the East Village of downtown Long Beach, California, USA. The Queen Mary sits proudly near the entrance to the Port of Los Angeles a gallant reminder of the close cooperation between the USA and Great Britain during the war years as well as the heyday of so many Hollywood stars that graced its deck in the years that followed. A tour of this mighty vessel shows not only the majesty of the on deck accommodations afforded its guests, but the cramped and narrow quarters provided for the crew and working staff. 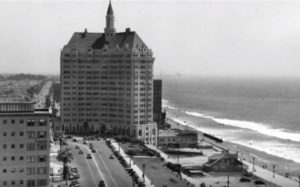 The Villa Riviera, the tallest building near the center of the post card of Long Beach, was built in 1927 and promoted luxury apartments. Unfortunately, the Wall Street crash of 1929 soon put a stop to those sales. Still, its iconic, regal stature at the end of Alamitos Street, just a few blocks from me, is visible for miles around and is always used as a guiding post to direct tourists to their final destination.

“What a wonderful sunset,” tourists whisper as they stroll calmly along the beach. There’s nothing like watching the Sun slowly sink in the west and the Pacific Ocean at nightfall. Indeed, since the city built up some of the shoreline to extend the beach out several hundred feet, the number of venues that cater to that crowd has multiplied many times over. There are over two dozen eateries and clubs in an area known as The Pike that provide afternoon and evening entertainment to accompany that always extraordinary part of the day when the sky turns yellow, then red, and the Sun leisurely descends below the horizon.

The four mile sandy, ocean-front trek from The Pike to Second Street, another conglomerate of eateries and nightlife locals, provides one with a serene, almost perfectly picturesque panorama of the ocean that is walked, strolled, trotted, skated, unicycled, scootered, biked and surreyed by hundreds every day. With the ocean breeze in one’s hair, it is nigh impossible to resist.

The Many Varied Faces of Europe in the Modern Era

Music Morph – The Origins of Mack the Knife