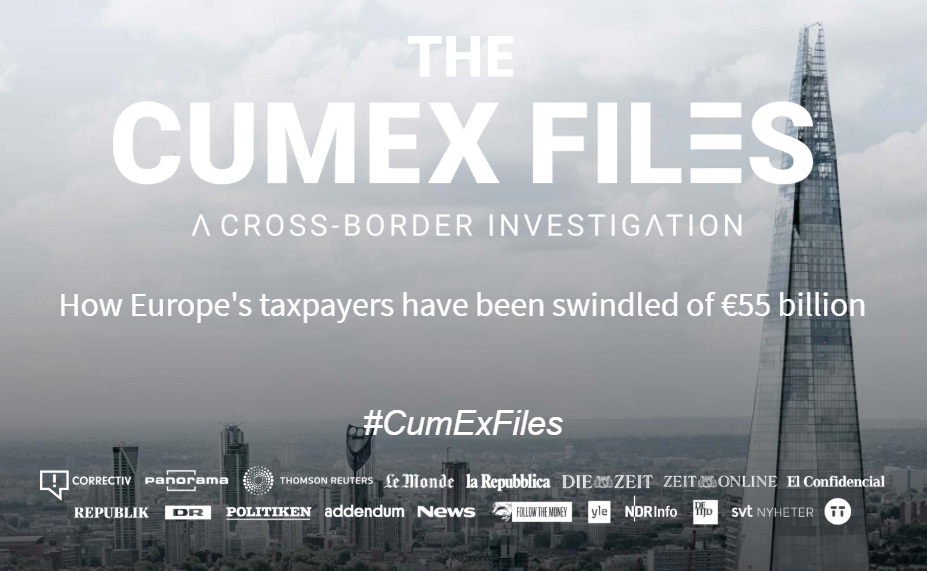 correctiv and other media

Banks have been defrauding governments since the first day a banker decided to withhold his tax payment until the government forced him to pay it. This allowed the banker to make more profit by loaning  the tax money out during the wait. More recently we have « financial products » that are bought and sold between financiers for astronomical sums of money without producing a single « good or service » for humanity. They then take their ill-gotten gains and put them in an offshore account to avoid paying any taxes. The rest of us can only watch while the money disappears from circulation, isn’t even taxed, and makes these money-sucking vampires richer and richer at our expense.  »

John Quiggin of Crooked Timbers has just posted the latest iteration of these financial nonproducts. Quiggin states, « The crucial point here isn’t the failure of the law to punish wrongdoing. What matters is that crooked deals of this scale suffice for a complete explanation of the growth of the global financial sector since the 1970s. The point of the financial sector is not to allocate capital more efficiently, but to undermine the regulatory and tax systems that are supposed to make the economy work properly. Unsurprisingly the huge financial boom has been accompanied by miserable productivity growth, repeated business collapses and massive growth in inequality. »

Fortunately, there is a citizen-based watch dog in Germany, Correctiv, who has been following up on this and has blown the cover of these fraudulent shysters.  It appears that the five hardest hit countries could be out  an estimated €63 billion. Germany appears to have lost at least €36 billion and France at least €17 billion. Other major losers are Italy, Denmark and Belgium.

Correctiv has also started a website, cum-ex files.com, which goes into detail on this. They even filmed a sting operation to get these evil warlords to admit to their wrongdoing on film. But even with all the evidence against them, the paultry sums that are being doled out as punishments is miniscule. As Quiggin states, « The bank most closely involved in the scam, HypoVereinsBank in German has set aside €200 million euros to cover its potential liability. That’s less than 1 per cent of the tax avoided or evaded (the lawyers will be fighting out which, for some time, but the effect on ordinary citizens is the same). »

The bottom line is this: most of the developed world is stagnating at a growth rate of + 1.5%. At the same time, major financiers (fraudsters in reality) are pushing megaschemes to double, triple and quadruple their net worth. The cherry on top for these loathsome creatures is that they avoid paying taxes at all. The rest of us are left with the tax bill as well as the need to replenish the bank vaults that have been emptied so that they can stay in business. If you want to know where economic inequality is manifest for all to see, look no farther than here. We are being screwed and the politicians are making sure that we pay the price for being screwed, not the bankers.